Playing out with Pester & Rossi 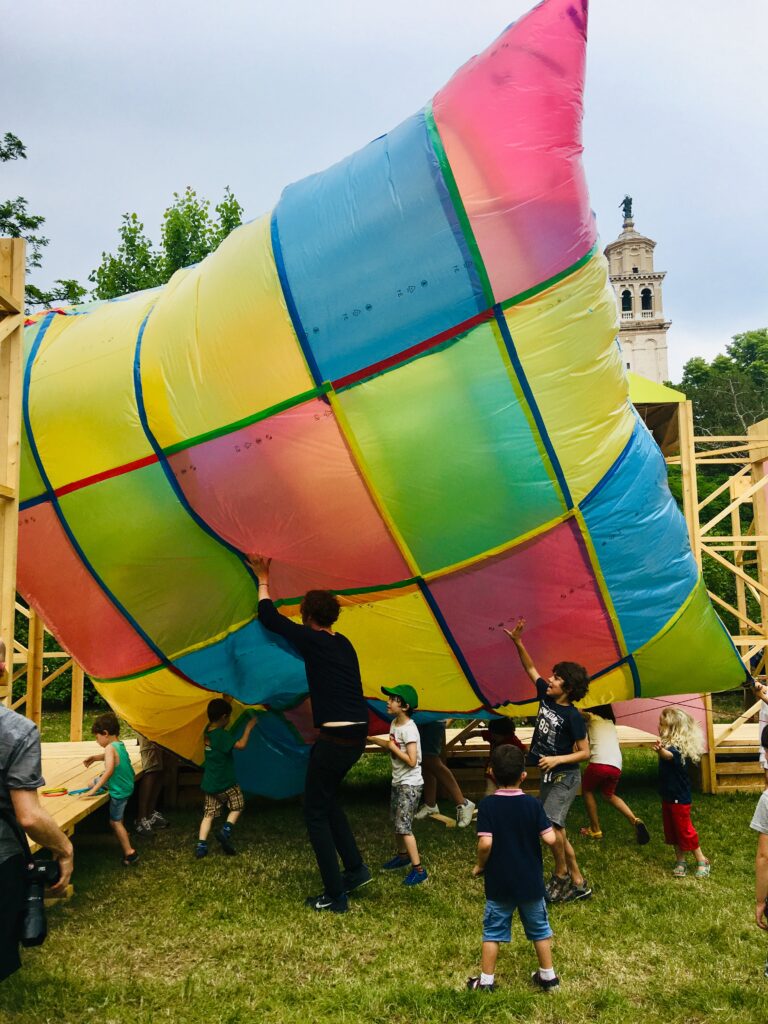 Since early 2020, we began the Playing Out in Bootle with artists Pester+Rossi. When lockdown hit, we had to completely adapt our plans to ensure children in Bootle still had access to new ways to play. We caught up with them to talk about their collaborative practice, future plans for the future.

Ruby Pester and Nadia Rossi have been working together since 2008, creating live art, installation, and public interventions in response to people and places. Their work celebrates the power of group action. Recent major projects include the Children’s Procession, for Hospitalfield Arts Arbroath, Infinity Pitch at BALTIC Gateshead, a residency at Glasgow Sculpture Studios and Venice Architecture Biennale 2018. Playing Out is their first commission in the North West of England.

We caught up with them to chat about their project, collaborating together, dancing to Britney Spears and their favorite games as children…

Hello Ruby, Nadia and welcome to our blog. Can you tell us how you’re working with the Playing Out project in Bootle?

RP & NR: Hello, thank you for having us! We are working in collaboration with children and young people at Community By Nature and local artist Nicki McCubbing using a series of experimental activities to explore and activate collective experiences of play, collective making and civic celebration. The project takes inspiration fromBootle’s social and radical play history; exploring and celebrating outdoor play and making through connecting to the different sites in the area, so it’s environment and community.

It all started at the beginning of 2020, with a series of workshops at Community By Nature working with young people in Bootle to share their experiences of play. We came up with new game ideas together working with scrap materials to whip up props and game parts. We thought about scale — from small games you could play in a shoebox in your bedroom, to big games that you could play with lots of people outside, taking over the street.

We were gearing towards an outdoor play event on Hertford Road in the summer of 2020, but as the pandemic hit we had to adapt our plans and think about new ways to keep connected with people from our homes in Glasgow to theirs in Bootle. Instead, we produced a series of Playing In packs that included a set of playing cards made from ideas that young people had come up with earlier in the year. These were distributed to young people and their families in Bootle during lockdown to be played with at home or outdoors in the neighbourhood. We played with them out at home and in our gardens too! The packs included simple play parts like cardboard shapes, fabric pieces, string, pegs, and painted sticks — with the idea that these packs could be used to create a completely new game in response to the game cards or players could make up entirely new ones.

Inspired by the Playing In game cards, we are now working on the production of a pack of large scale Playing Out parts to be used in a video exchange with and by young people across the two cities of Glasgow and Liverpool. Included in each pack will be a set of fabric parts to wear, a megaphone, a set of prompt cards and an invitation to play. Our plan is to invite the groups to come up with their own games, as well as inviting them to play in whatever way they felt like. Hopefully this invitation to play will encourage young people to experiment and interact with the environment they live in. The process will be documented and made into a set of films that we are hoping we can share, when it’s safe to do so, as part of an outdoor screening in both cities.

Play by your own rules

Make your own sense

When did you first know you wanted to be an artist?

RP: From about the age of 10. I always loved drawing and painting fruit bowls and parrots and faces. I remember being very inspired by an artist friend who used to rent a room in my dad’s house. She was always making surreal paintings of forests full of hidden creatures and huge paper mache props for carnival parades which I found thrilling and often ended up getting involved in.

NR: I never really knew I wanted to be one. I’ve always enjoyed making stuff, organising and putting on parties. Art school was great for all those things and after I graduated I managed to keep a hand in making art with friends alongside doing a load of other jobs. 12 years on and it feels more manageable and like a real thing.

Tell us about the first project you worked on together?

RP: The first thing we did together happened in quite a lovely funny spontaneous way… It was our last year at art school way back in 2008 and Nadia came to me in my studio one day telling me she had a dream that we made this crazy thing together with some funny yellow orb heads I was making at the time and some masks made of pink rubber gloves she’d been making. So we decided to make our body props collide! We gathered a bunch of friends and paired them off for a dance, one partner wearing a yellow orb on their head and the other wearing a pink rubber glove mask. One could see and one couldn’t; the one who could see would have to lead the other through the dance in a kind of blind trust. We made a video of the dance in the green room, all-dancing around in a sort of surreal waltz in unison to Britney Spears. Lol. The rest is history.

NR: Was it really to Britney Spears?! In my memory it was something much more highbrow, ha. I do remember it was a kind of joyful release though. It wasn’t something that was being ‘marked’ or ‘critiqued’ like the rest of the work we had to make at that time. It was really freeing to be able to make something with a group of people and not just on our own in the individualistic way we were encouraged to work at art school back then. It was clear that working with people and being a part of something bigger than ourselves gave what we were making more meaning, even back then.

And finally, can you tell us what was your favourite outdoor game when you were kids?

RP: Ooohh it’s hard to choose just one! Hide and seek, rounders, tig, red rover, boat building, treasure hunts, hiding treasure in trees, water fights, potion making, being buried in the sand, jumping off my bunk beds into a huge pile of cushions and making beds out of toilet paper for my cuddly toys — the list goes on!

NR: That is an impressive list Ruby. You’ve pretty much covered all the quality outdoor games. I’ll add chasing to that. I loved chasing people and also being chased, playing in the lanes on rope swings and making our own club houses in bushes or garden sheds. I also remember playing a lot of odd games in primary school that reflected the adult world. We played Cops & Robbers, Spice Girls, McDonalds (this was actually such a boring game where we just had to stand at a station in the playground and pretend to put whatever pretend topping you had on your pretend burger) and Going On Holiday To A Hotel. These were all games that you could just play quickly on playground break with no stuff, just the memorised actions and areas of the playground. Someone would just call it, you’d play it, then the bell would go.

Download the Pester and Rossi Playing Out play pack here.